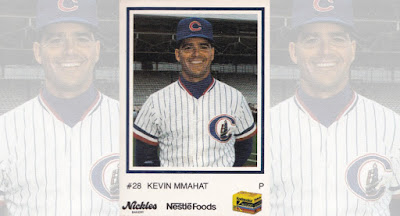 Kevin Mmahat's pitching coach had some simple advice for him before his first major league start, Mmahat told The Associated Press afterward.

"Our pitching coach, Billy Connors, told me to go out there and have fun - but it wasn't much fun," Mmahat told The AP.

It wasn't much fun because Mmahat lasted only 1.2 innings, giving up five earned runs. One of the newest Yankees, Mmahat also had that poor outing against the Red Sox in Fenway Park.

Mmahat's career began in 1987, taken in the 31st round of the draft out of Tulane University by the Rangers. He played just one season in the Texas system, in the rookie Gulf Coast League.

For 1988, the Yankees purchased him. He played at single-A Fort Lauderdale and even got six starts at AA Albany-Colonie. Between them, he went 9-10, with a 4.09 ERA. With Fort Lauderdale, Mmahat made the league All-Star team.

Mmahat split 1989 between Albany and AAA Columbus. He went 8-5, with a 2.97 ERA between them. He also then got his call to the Bronx in September.

"I could smell the fresh grass cut." Mmahat told the site. "It was in the House that Ruth built. It was emotional. I am walking in Yankee Stadium. I was crying."

Mmahat debuted with the Yankees Sept. 9, coming into the game late in a 7-0 loss to the Athletics. Mmahat picked up two outs, one on a strikeout, and gave up one hit.

He didn't get his second outing until 12 days later, a 3.1-inning effort where he gave up four earned runs. Mmahat also got ejected for hitting a batter after an earlier brawl and a warning.

One of those 1991 outings, though, was a gem: a no-hitter against Louisville all with a sore shoulder.

"I didn't really think about it," Mmahat told The AP afterward of the no-hitter. "I was more concerned about my shoulder, which really didn't feel good tonight."

Mmahat has since returned to Louisiana and co-owns Rhino Shield Louisiana, selling a kind of maintenance free house paint replacement. 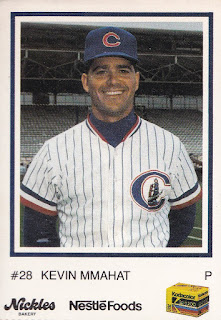