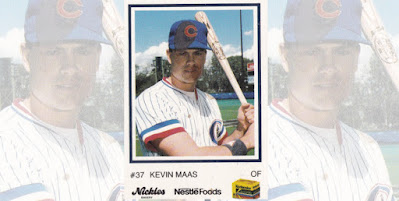 Originally published Jan. 30, 2011
Nolan Ryan went for his 300th, Kevin Maas and the Yankees in July 1990 held him at 299. Maas knocked a home run off the future Hall of Famer, making Ryan wait for his milestone win.

"Just to bat against a Hall of Famer is an honor," Maas told The Associated Press after the game, "and to hit a home run off him is the greatest feeling I've had in my life."

That home run off Ryan was Maas' third in three games and his seventh since his debut a month earlier. Maas would go on to hit 21 home runs for the Yankees that year in just 79 games, prompting overheated comparisons between Maas and other Hall of Famers and hopes for a long career swinging the bat for the Yankees.

But Maas never did meet those overheated expectations. He spent just four seasons in the Bronx, slowed by inconsistency and an inability to quickly adjust. After stops in Minnesota and Japan, his career was over by 1998.

Maas' career began in 1986, taken by the Yankees in the 22nd round out of the University of California. He also joined his brother Jason Maas in the Yankees system. Jason Maas signed with the Yankees the year before.

By 1997, Kevin Maas, playing at single-A Fort Lauderdale, was already eying the Bronx. But the first baseman knew off in the distance was Yankee stalwart Don Mattingly was in the way.

Maas was just trying to do his best, he told The South Florida Sun-Sentinel in June 1987. Fort Lauderdale Manager Buck Showalter saw him doing just that.

"When he makes contact with the ball, good things happen to us offensively," Showalter told The Sun-Sentinel. "He plans to play in the big leagues and he is going about that job."

Maas made AA Albany-Colonie in 1988, then AAA Columbus in 1989. He returned to Columbus for 1990, then got his call that June. Mattingly was having injury problems.

Asked then by a reporter if he was surprised by his power, Maas said he wasn't, according to The New York Times. ''Not by the power, but by the frequency. To think I could keep up a pace of a home run for every nine at-bats surprises me.''

Maas ended the season with 21 home runs, and expectations that he would do even better in 1991 with 35 to 40. With Mattingly healthy, Maas became a reluctant DH. He hit .220 on the year with 23 home runs.

Pitchers had adjusted to Maas, he'd also picked up bad habits in his stance. Yankees Manager Stump Merrill told The Times that October he believed it was a phase.

"It's part of the maturation process," Merrill told The Times. "A young kid comes in and takes the city over in his first year and then gets slapped in the face. Getting to the majors is not the tough thing. Staying there is."

By the end of spring training 1994, Maas' career with the Yankees was over. He was released.

"As far as what happened to Kevin," then-Bronx manage Showalter told The Times, "that's a puzzle."
The Times also quoted Maas: "Maybe the expectations were too high."
Maas played just 22 more games in the majors, in 1995 with the Twins, hitting just one more home run. He played 1996 in Japan with Hanshin and returned to the U.S. for one more season in the minors, ending his career.

Speaking to The New York Daily News in 2009, Maas looked back on his time with the Yankees fondly.

"I'm proud of what I did," Maas told The Daily News. "I came up on a roll from the minor leagues. My bat was ringing pretty loud, and the Yankees put me in the lineup right away. That early success gave me confidence. It wasn't any magic or pixie dust or anything like that, it was just a lot of hard work and it was almost a yearlong groove for me. 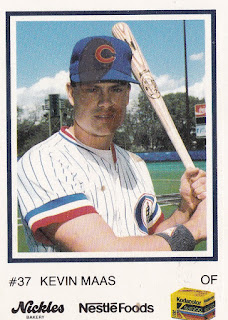