Jason Maas helped out Yankee teams as high as AAA; Fell short of bigs, but brother got there

Originally published Dec. 26, 2010
The Fort Lauderdale Yankees were vying for a spot in the Florida State League championship game in late August 1987 and Jason Maas wasn't in the lineup. That was actually part of Fort Lauderdale Manager Buck Showalter's plan. And it worked.

Put in as a pinch hitter in the eighth inning Aug. 29, Maas smacked a two-run double, putting Fort Lauderdale over the top and sending them to the championship series, The South Florida Sun Sentinel wrote.

"When you make out a lineup, you always try to leave people in the dugout who you have confidence in to deliver in a tight situation," Showalter told The Sun Sentinel of Maas. "And he certainly wasn't the only one."

While he helped single-A Fort Lauderdale that year, and would help Yankee teams as high as AAA Columbus, Mass would not make the Yankees in the Bronx or any other major league team.

He would retire in 1991, after seven seasons in the Yankees system, and not on good terms with his parent club.

Maas career began in 1985, selected by the Yankees in the 10th round of the draft out of Cal Poly-San Luis Obispo. Maas' college days also took him to Alaska, where he played for the Anchorage Glacier Pilots in 1984.

Maas was taken a year ahead of his brother Kevin Maas, who was also selected by the Yankees. The two even played together at several points in their minor league careers.

That June, for Fort Lauderdale, the Maas brothers combined for seven hits, four of them Jason's, in a 9-2 win over St. Petersburg, The Sun Sentinel wrote.

Jason Maas made AA Albany-Colonie in 1988, the first of two years he would spend with the Eastern League team. He hit .271 his first year and .296 the next.

In 1988, Maas again helped his team to the league finals, playing with the team the whole season, The Schenectady Gazette wrote. In July, Maas smacked three hits and knocked in five against Pittsfield.

Maas credited a winning series in mid-August with putting the A-C Yanks on course for the playoffs.

"We all started hitting, and for the first time, we all started thinking about the playoffs," Mass told The Gazette.

Maas made AAA Columbus in 1990, hitting .248 for the Clippers. But, while his brother had a break-out second half in the Bronx, Jason Maas stayed behind in the minors. And he returned to Columbus in 1991.

The second year at Columbus, Maas hit .352 in 30 games. But his career ended after a dispute with the big club. Maas asked for his release, not believing the Yankees were going to bring him up. The Yankees refused. Maas responded by retiring and making plans to go to college.

"They never treated him well," brother Kevin Maas told a reporter in early August. Kevin Maas also went into a slump after the dispute came to a head. "It's sad to see my brother end up on that type of note." 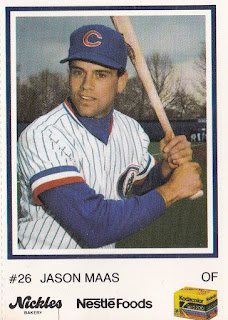