The Fort Worth Star-Telegram called Doug Brocail a long shot to make the Rangers in 2004.

A veteran of nine major league seasons, Brocail, however, hadn't seen the majors since 2000, all after two consecutive Tommy John surgeries, The Star-Telegram wrote.

"I feel pretty good about it," Brocail told The Star-Telegram that spring. "I know I'm going to have to pitch my rear end off. I'm not afraid of that."

Brocail's "long shot" ended up turning into a roster spot. It also turned into time in six more major league seasons. He didn't pitch in his last big league contest until 2009, at age 42 with the Astros.

He has since gone on to teach others the lessons he learned through his long career. He's done so as a major league pitching coach, with the Astros, Rangers and Orioles.

Brocail's long career in baseball began in 1986, taken by the Padres in the first round of the January draft out of Lamar Community College in Colorado.

His debut, though, didn't go exactly according plan. He went 3.2 innings and gave up four earned at San Francisco. But he did pick up a bunt single, The Los Angeles Times wrote.

"It's not the kind of debut you'd like to have," Brocail told reporters afterward, according to The Times, "but I'm sure I'll remember it. I really wasn't as nervous as I thought I'd be, until I stepped to the plate. Then I started shaking real bad."

Going into that first campaign with the Tigers, Brocail spoke with The Associated Press about getting a queasy feeing about getting out on the mound.

"If I ever lose that feeling before I pitch, that's the day I'm quitting baseball," Brocail told The AP. "It lets me know that I'm alive and feeling good. But it'll be gone on the first pitch. That's when you tighten the belt, get over it and get to work."

He then underwent his Tommy John surgeries. Upon his return in 2004, he saw 43 outings for the Rangers that year and 61 in 2006. Going into 2006, he underwent two more surgeries, on his heart to open up near total blockages that could have taken his life at any moment, according to The Dallas Morning News. 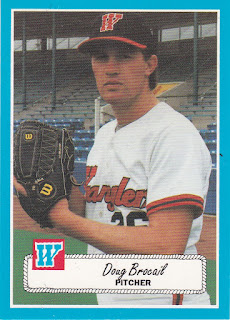