Rich Holsman liked to play the game, did so over five seasons; Made AA

After already getting released twice in 1991 and in his fifth pro season, Rich Holsman appeared to have caught on with his home state Brewers at high-A Stockton.

Holsman attempted that July to explain to The San Bernardino County Sun what kept him going.

"You play the game because you like the game," Holsman told The Sun. "My attitude since (being released) has been a lot healthier. I have the game in my hands."

Holsman finished out the year with Stockton, but that season proved his last as a pro. He topped out at AA.

Holsman's career began in 1987, taken by the Padres in the 14th round of the draft out of San Diego State University. Holsman was also credited by his formal name, Richard Holsman.

Holsman started with the Padres at short-season Spokane. He went 6-4 over 34 relief outings that year, with a 1.89 ERA.

He spoke to The Spokane Spokesman-Review that August about the differences between college and the pros, including what the coaches allowed him to throw.

"They didn't let me throw my screwball this year; they didn't like it," Holsman told The Spokesman-Review. "The pitching coach called my game. I couldn't shake anything off. I threw mainly curveballs."

He returned to Wichita and returned to relieving for 1990. That season proved his last with the Padres.

For 1991, he played between AA Harrisburg with the Expos, high-A San Bernardino with the Mariners and Stockton with the Brewers. He went 4-9 overall, with a 2.81 ERA to end his career. 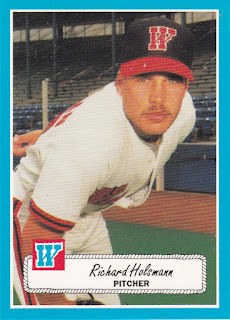