John Deutsch went from undrafted to fifth-rounder, then got his chance over five seasons; Made AA 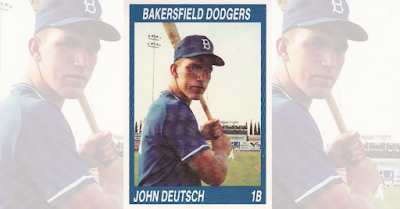 Montclair State's John Deutsch got passed over in the draft after his junior year. So, in his senior yearin 1989, he went out and had a season the scouts couldn't help but notice, his hometown Allentown Morning Call wrote.

"I didn't want the same thing to happen as last year," Deutsch told The Morning Call. "I finally got a chance. That's all I wanted, a chance. Now it's up to me."

Deutsch took his chance on to five professional seasons. He made AA, but didn't make it higher.

Deutsch's career began that year in 1989, taken by the Dodgers 136th overall out of Montclair State.

At Montclair, Deutsch won All-American honors three times and Division III Player of he Year honors in 1989. His work earned him the title "greatest player to wear a Montclair State uniform" and, in 2020, selection to the National Collegiate Baseball Hall of Fame.

Deutsch started with the Dodgers at rookie Great Falls. He hit .296 in 64 games. He also hit six home runs. In one July game, a Deutsch check swing knocked in two runs, according to The Great Falls Tribune.

"They were pitching me outside and he took some off his fastball," Deutsch told The Tribune afterward.

"He wasn't overpowering," Deutsch told The Los Angeles Times, "but he was really hitting his spots. He was everything everybody said he was."

Deutsch played 1992 between Bakersfield and AA San Antonio. He hit .206 in 68 games at AA, with six home runs.

He moved to the Cubs system for 1993. He saw 43 games at single-A Peoria to end his career. 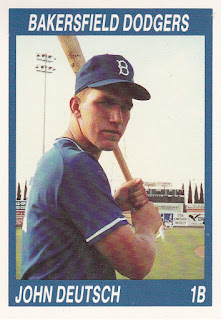