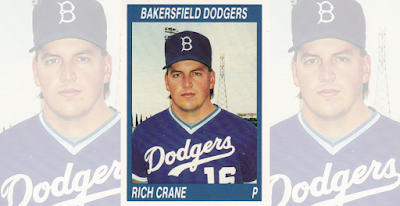 Fresno State starter Rich Crane did his his best in this June 1988 College World Series game against Miami, but his best wasn't enough, according to The Palm Beach Post.

Crane's best included pitching into the 11th inning, while giving up three earned and one stretch where he set down 26 of 27 batters, The Post wrote.

"He was really pitching," Miami's Frank Dominguez told The Post of Crane, who ultimately got the no decision in the loss. "Some guys try to throw a fastball by you. He was very selective."

Crane went on from Fresno State to be selective in the pros. His time in the pros lasted three seasons. He made high-A.

Crane's career began in 1989, taken by the Dodgers in the 62nd round of the draft out of Fresno State.

Crane started with the Dodgers at rookie Great Falls. He saw 16 outings in relief and picked up three wins and a 3.33 ERA. He picked up that third win in an August appearance where he went 1.2 innings and gave up one earned.

Crane moved to high-A Bakersfield for 1990. He went 3-3 there over 33 outings, eight starts, with a 3.42 ERA. One of his wins came in a July 4-1 Bakersfield victory, an outing where he garnered praise from opposing Palm Springs manager Nate Oliver, according to The Desert Sun.

"There hasn't been a whole lot of offense of late," Oliver told The Sun of his own hitters before crediting Crane. "(Crane) pitched a good game. He got out of the jams when he needed to."

Crane returned to the high-A California League for 1991 at Reno. He saw 10 outings, one start, and gave up 19 earned in just 12.1 innings to end his career. 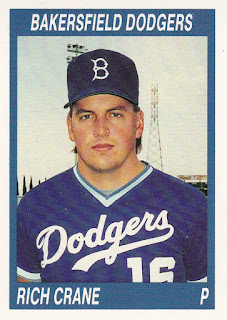