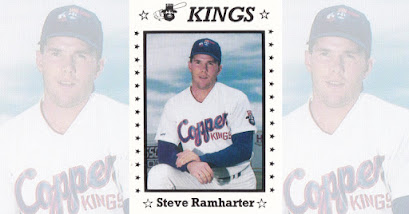 Steve Ramharter recorded his thoughts on his first spring training in 1991 for his hometown Sioux Falls Argus-Leader.
He'd always looked forward to being a part of it, he wrote, but his first also came with question marks around his pitching shoulder, and whether he'd made the right decision for a cortisone shot over surgery.
"It's a terrible feeling not knowing whether your arm will be able to handle the strain of pitching," Ramharter wrote in The Argus-Leader as his spring began. "I guess I'll find out tomorrow."
Ramharter soon did find out. He needed surgery and his playing career was over. He did, however, go on to a second career in the game as a coach in college.
Ramharter's playing career began in 1990, signed by the Rangers as an undrafted free agent out of Rice University.
During high school, Ramharter won his state's American Legion Player of the Year honors in 1985. He also lettered in four sports at Sioux Falls' Lincoln High, baseball, basketball, football and track. He also played at Murray State Junior College and in Alaska.
With the Rangers, Ramharter played the 1990 season at rookie Butte. He went 2.2 innings in a July, giving up one hit, three walks and hitting a batter. Overall, he got into 22 games in relief, went 2-1 and had a 6.52 ERA.
He then returned for spring 1991 with that questionable shoulder. By April 1, he'd felt pain during a game, rather than just warming up, he wrote in The Argus-Leader. He soon learned he needed surgery and was among a list of players who'd been released.
"Frequently I was warned that sometimes such dreams don't always come true," Ramharter wrote of pro dreams he had growing up. "Well, I just want to say that sometimes they do because for a short time I was able to live mine out."
Soon, Ramharater took over as coach at Howard Junior College in Texas, then at Trinidad State in Colorado, where he coached in 1998. He arrived at Midland College in 2001, where he stayed until 2006, when he left for pharmaceutical sales. 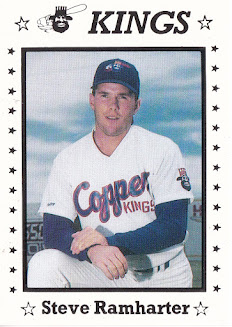