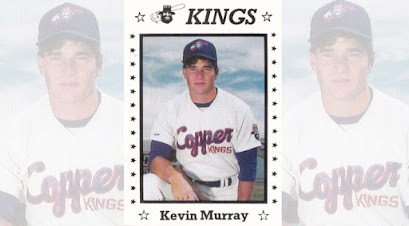 Keith Murray just needed to see the ball to hit it in this April 1991 game for single-A Gastonia, according to The Charlotte Observer.

After having issues with his contacts, Murray got new ones with the wrong prescription. He then struck out. Then he tried glasses mid-game and promptly picked up three hits, ending a triple shy of a cycle, The Observer wrote.

Murray picked up those hits near the start of his second season as a pro. That season, however, also turned out to be his last. He topped out at single-A.

Murray's career began in 1990, taken by the Rangers in the 23rd round of the draft out of the University of South Alabama. Murray was incorrectly identified on his 1990 card as "Kevin Murray."

Murray started with the Rangers at rookie Butte, but his career got off to a difficult start. He suffered an injured wrist after being hit by a ball prior to the season and saw only seven games.

He hit a double in a June game and overall went 8 for 13. But the lingering injury led the Rangers to send him home for rehab by early August.

Murray moved to Gastonia for 1991. He hit a two-run triple in one April game, then went 4 for 8 over a double header later that month, including a triple and a home run. Overall, he hit .243 in 104 games to end his career. 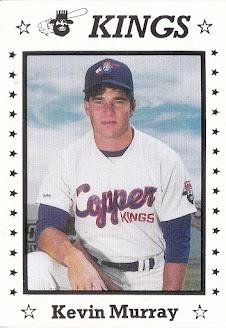