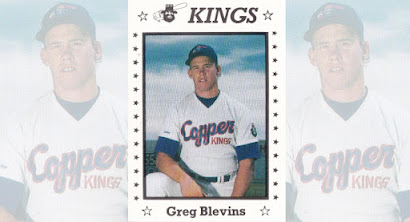 Greg Blevins had a big day for the University of Southwestern Louisiana in April 1990 as he hit three home runs, one of them a grand slam, The Opelousas Daily World wrote.

Blevins then detailed the performance afterward to The Daily World.

"The first homer I got, the guy hung a slider. On the second one, he kept throwing me curve balls," Blevins told The Daily World, "so I stayed with his pitch. The third one I hit, I knew he was coming with a fast ball. I thought that one was the best one I hit."

Blevins soon took his hitting from college to the pros. The catcher wouldn't be able to repeat his home run success in college. He played two seasons. He made single-A.

Blevins' career began that year in 1990, taken by the Rangers in the 15th round of the draft out of Southwestern Louisiana.

Blevins spent his high school time at Choctaw High in Choctaw, Okla. In summer 1986, he played for the Metro Summer Baseball League in Choctaw and earned praise from his coach, according to The Daily Oklahoman.

"Greg just continues to do the job," coach Jim McCharen told The Oklahoman. "He's determined to become one of the top catchers in the state and he's putting in the type of work and dedication he needs to accomplish that."

Blevins started with the Rangers at rookie Butte. He got into 41 games and hit .237, with three home runs.

He then moved to single-A Gastonia for 1991. That July, the catcher assessed an opposing pitcher's good performance to The Charlotte Observer.

"For a finesse-type pitcher, that's as good a performance as we've seen this year," Blevins told The Observer. "He didn't make any mistakes. And he had that rhythm early on and just kept it going."

Overall, Blevins saw 105 games that year. He hit .213, with six home runs. That season marked his last as a pro. 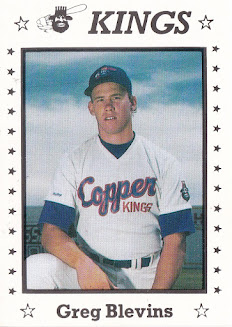