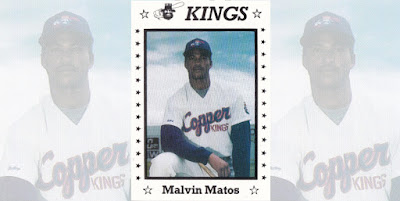 Malvin Matos powered his way into the Texas-Louisiana League lead in home runs in August 1988 and he did so by hitting two three-run shots, his 24th and 25th on the year, The Alexandria Town Talk wrote.
Matos explained afterward to The Town Talk how he did it.
"I felt very good," Matos told The Town Talk. "The first one I hit was a curveball and I got good contact on that one. The second one came off a fastball inside."
Matos spoke as a member of the independent Alexandria Aces, in his 10th season as a pro and fourth with Alexandria. He went on to play in a total of 14 professional campaigns, nine of those in independent ball. He topped out in affiliated ball at high-A.
Matos' career began in 1989, signed by the Rangers as a free agent out of his native Venezuela.
Matos started with the Rangers in the rookie Arizona League. He hit .254 in 43 games. He then moved to rookie Butte. He hit .222 there, with four home runs over 50 games. He beat out an infield hit to start a game-winning rally in an August game.
Matos made single-A Gastonia for 1991 and 1992. He hit .212 and .219, with four and seven home runs.
He hit single-A Charleston in 1993 and high-A Port Charlotte in 1994. He hit .236 in 69 games in 1994 to end his affiliated career.
Matos then turned to the independent circuit. In 1995, he played for Mobile and Alexandria. He continued to play for Alexandria through 1999.
Going into 1996, he played winter ball in his native Venezuela. He told The Town Talk his work there helped him improve.
"Some people think baseball is just hitting, throwing and fielding," Matos told The Town Talk. "There's more. It's little things like bunting to move a guy over and bring him in. If we don't do what we have to do, we don't win game."
Matos ended the 1998 campaign with 26 home runs, a career best. He hit another 26 for Alexandria in 1999.
He then continued in independent ball through 2002. He last played for independent Albany-Colonie. 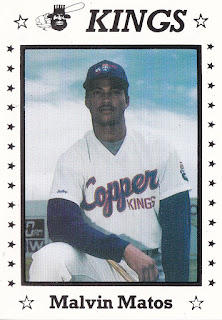