Kevin McDonald's threw a complete-game, one-hitter this night in August 1991 to led his Salt Lake team over Great Falls and Great Falls manager Glenn Hoffman could only praise McDonald's work to The Great Falls Tribune.

"(McDonald) must have been making some really good pitches," Hoffman told The Tribune. "He moved the ball around well and had good velocity from start to finish. He pitched a helluva game."

McDonald pitched that game in his second season as a pro. He went on to see four pro campaigns. He topped out at high-A.

McDonald's career began in 1990, taken by the Brewers in the ninth round of the draft out of the University of Louisiana at Lafayette.

McDonald started with the Brewers at rookie Helena. He went 3-2, with a 4.70 ERA over nine outings, eight starts. He gave up six runs in a July start, but still took the win.

McDonald then joined the Expos system for 1992. He played that year between high-A West Palm Beach and single-A Rockford. He went 6-5 between them, with a 2.71 ERA over 24 outings, 14 starts. 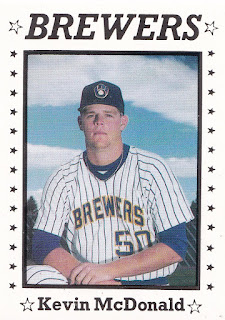