Juan Flores started the 1990 season at the University of Miami as the team's second catcher. After the starter cooled, though, Flores stepped up, The West Palm Beach Post wrote.

He did so with a .328 average by late March, The Post wrote.

"The concept here is teamwork," Flores told The Post then. "If we're winning, I don't mind not playing, but if the opportunity is there, I'm going to take it."

Flores soon took his opportunity on to the pros. His pro career lasted three seasons. He briefly made high-A.

Flores' pro career began that year in 1990, signed by the Brewers as an undrafted free agent out of Miami.

"Getting used to the wooden bats," Flores told The Helena Independent Record of his slow start.

Late that season, his defensive work behind the plate stood out as threw out four runners in one game, The Independent-Record wrote. 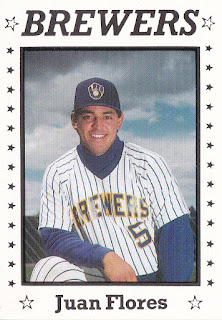