John DeJarld looked forward to his second pro season, but injury cut short that season and his career 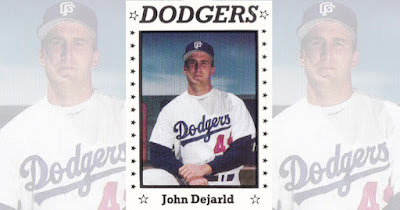 John DeJarld went undrafted in 1990, but then went on to have a sterling year that year as a reliever in rookie ball with the Dodgers.

So, when he looked toward Year 2 in February 1991, he laid out his plan, one where he had hopes of moving up to AA and even higher, according to The Daily Iowan.

"My goal is to have a good enough year to make it to double-A next year," DeJarld told the University of Iowa paper. "Maybe get moved up during the year, but I'd have to do really well to do that."

For DeJarld, though, he never got the chance to show what he could do on the mound that season or again. Shoulder problems surfaced that spring, problems that would end his career.

DeJarld's brief career began in 1990, signed by the Dodgers as an undrafted free agent out of the University of Iowa. DeJarld was also credited as John De Jarld.

At Iowa, DeJarld worked as both as both a starter and as a reliever. On one day in May 1989, he worked as both. He threw a complete game win in Game 1 of the day and the final two innings of Game 2, The Iowa City Press-Citizen wrote.

With the Dodgers, DeJarld played his season at rookie Great Falls. He saw 22 games in relief, saved four, won three and ended with a 1.64 ERA.

He picked up another save in the playoffs as he went three innings and gave up one hit against Salt Lake to help his club move one win from the league title.

Then came spring 1991 and his shoulder. He needed major reconstructive surgery and was cut midway through that spring. 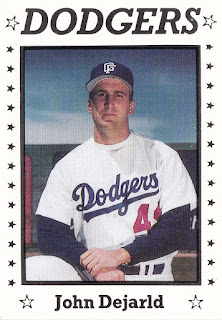