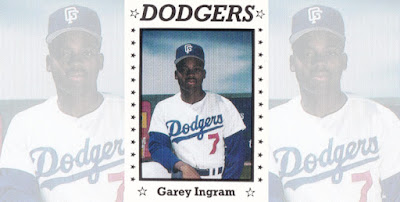 Still basking in the glow of his first call-up to the majors in 1994, the newly minted Dodger Garey Ingram explained the experience to The San Bernardino County Sun.

Ingram made the majors in his fifth season as a pro. He went on to see the bigs over three different campaigns and total 82 big league appearances. He has since gone on to help get others there, as a coach in the minors.

Ingram's career began in 1990, taken by the Dodgers the year before in the 44th round of the draft out of Middle Georgia State College.

Ingram started with the Dodgers in 1990 at rookie Great Falls. He hit .343 over 56 games as an outfielder. He then saw high-A Bakersfield and briefly saw AA San Antonio in 1991 and then saw San Antonio again in 1992.

He then returned to the Dodgers for 1995, but the club moved him again to start the year, to third. He then made several errors to start the year, according to The Los Angeles Times. Dodgers Manger Tom Lasorda worked to get Ingram focused on what was ahead.

"He's been doing good," Lasorda told The Times then. "It's just throwing the ball ... He's made a couple of bad throws. That's happened to a lot of people. We've just got to make him forget about it."

Ingram saw a total of 12 games at third and made eight errors. He then saw another seven back at second and eight in the outfield. Overall, he hit .200 over 44 total games.

Ingram then didn't return to the majors until 1997, when he saw 12 games with the Dodgers. He went 4 for 9. Those games marked his last in the majors.

He continued playing in the minors through 2002. He last played that year at AAA Las Vegas. That same year, he started to coach, with the Dodgers in the rookie Gulf Coast League.

Ingram coached at single-A, then made AA Connecticut in 2009. He moved to the Braves and AA Mississippi in 2010 and made AAA Gwinnett as hitting coach in 2014.

In 2017, Ingram moved to the White Sox and AAA Charlotte. He explained to The Charlotte Post that year the difference between players at different levels of the minors.

"Some of them are former Major Leaguers and they know how to prepare themselves on an every day level to get back to the Major Leagues," Ingram told The Post of AAA players. "When you're dealing with the younger levels, you’re dealing with a lot smaller details that you have to pay attention to, especially developing those kids to get to this level." 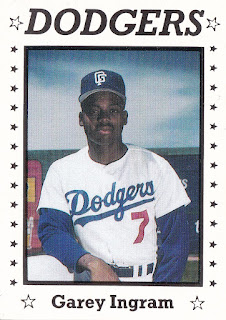