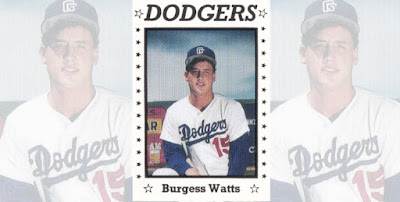 The College of DuPage baseball team emerged from sectionals in 1990 confident and infielder Burgess Watts expressed that to The Arlington Heights Daily Herald.

Watts took that confidence from college on to the pros. His pro career lasted four seasons, including two seasons spent on the mound. He topped out at high-A.

Watts' pro career began that year in 1990, taken by the Dodgers in the 19th round of the draft out of DuPage.

Watts went to DuPage out of Wheaton Central High School in Illinois, where he also played quarterback in football. He played quarterback well enough there that his coach told The Chicago Tribune in August 1984 that Watts could be "the best we've ever had here."

On the baseball field at DuPage, Watts hit a May 1989 grand slam that sealed a win. He then conference Player of the Year honors in May 1990.

Watts started with the Dodgers at rookie Great Falls. He saw 51 games as a third baseman and hit .267. He had a scare in an August game, when he was hit in the chest by a pitch and taken by ambulance to the hospital. He was treated and released and then played the next night.

Watts moved to high-A Bakersfield and short-season Yakima for 1991. He hit .290 overall in 58 games.

Watts then moved to the mound and back to Yakima. He got into 24 outings there, starting one. He went 4-2, with four saves and a 3.58 ERA. 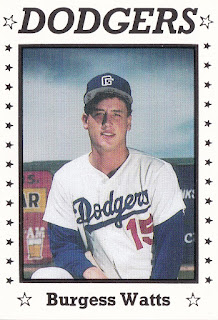