Coming out of Missouri Baptist University, Joplin, Mo., native Sean Sadler saw himself going to the pros, he told The Joplin Globe in June 1990.

"I was confident I would be drafted," Sadler told The Globe. "I just didn't know when."

Sadler had just learned the when: The Tigers had selected him in the 11th round. His pro career, however, turned out to be brief. He played two seasons. He topped out at single-A.

Sadler's career began that year in 1990, taken by the Tigers 292nd overall. Before going to Missouri Baptist, Sadler played his high school ball at Joplin High.

Sadler also grew up in a baseball family. His father, Richard Sadler, played four seasons in the minors in the 1960s, The Globe wrote.

At Missouri Baptist in March 1990, Sadler amassed a .453 average and had hit eight home runs. Sadler was happy with his progress, he told The Globe then.

Sadler started with the Tigers at short-season Niagara Falls. He hit .251 over 62 games. He played at first, third and at catcher.

He moved to single-A Fayetteville and returned to Niagara Falls for 1991. He hit .211 between them with two home runs. That season marked his last as a pro. 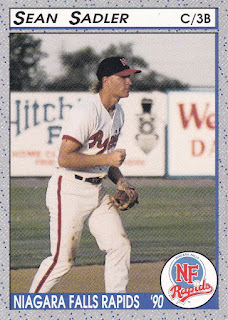