Originally published Sept. 17, 2017
The Midland Angels and Wichita Wranglers seemed to play a football game this night in April 1990. The two teams scored 50 runs between them, ending in a 33-17 score. The Wranglers took the win.

Barns has since settled in Texas. He serves in 2017 as a coach for the 18U Bullpen Bulls in Cypress. 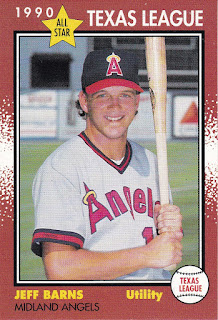