Two of the sets even included sponsor cards, the 1989 set a coupon on the back.

"Turn this card in at Fielder's Choice and receive a 10% discount on purchase of single cards," the note on the back read.

The store was located at 1402 18th St. in Niagara Falls, the card back read. The address was about a mile from the Rapids' home field, Sal Maglie Stadium.

The shop, though, and the building itself, are long gone.

By 2017, that address was a vacant lot, according to Google Streetview. Ten years earlier, the storefront remained, but its windows were boarded up.

However long the shop lasted, shop owner Larry Tierney and two children, Jake and Erica, appeared on two sponsor cards in the sets, one each in 1989 and 1990.

The 1989 offering included a picture of the father and children with Tigers and Rapids gear. The Rapids were the short-season affiliate of Detroit.

All three returned to the 1990 sponsor card, this time at the Rapids' home field, Sal Maglie Stadium.  On this card, Larry Tierney wore a Tigers shirt and he and Jake Tierney wore Rapids hats.

The 1990 card also appeared to misspell the shop owners' family name, as Larry and Barbara Tiermey. The family's name is twice spelled as Tiermey on the card back.

Fielder's Choice again sponsored the Rapids set in 1991, the ProCards set, though did not get a separate sponsor card.

Fielder's Choice was still in operation a year later, in June, when a Buffalo News police blotter item recorded a burglary there, where a video game was reported taken.

However long Fielder's Choice lasted, the Rapids' time in Niagara Falls proved limited. They stayed through 1993, when the franchise then moved south to Jamestown, NY. 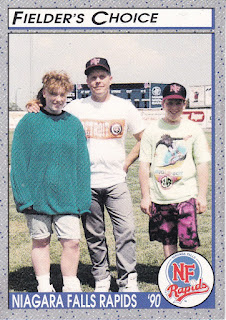