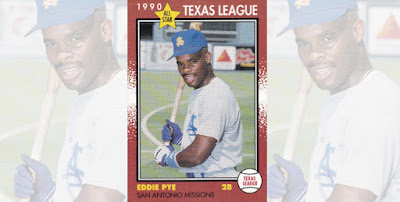 Karros did so by pointing out the familiarity of his surroundings and he got Pye laughing in the process, Pye told The Times.

"Eric said, 'This is just like (the Dodger rookie team at Great Falls),'" Pye told The Times. "I looked around, and there's Offy (Jose Offerman) and Karros, and I played three years in the minors with both of them. So I relaxed, because it wasn't like I had never played with them before."

While Karros and Offerman were in the midst of lengthy careers in the majors, Pye's stay in the bigs turned out to be brief. He played seven games that year and seven the next, marking the extent of his major league career.

Pye's career began in 1988, taken by the Dodgers in the 10th round of the draft out of Middle Tennessee State University.

Pye started with the Dodgers with Karros and Offerman at Great Falls. Pye hit .300 over 61 games. He moved to single-A Bakersfield for 1989 and hit .258.

He made AA San Antonio for 1990, where he hit .248. He then saw AAA Albuquerque, but only for 12 games. He returned to Albuquerque for longer stays each year through 1995.

Pye saw his major league debut with Los Angeles in June 1994. He got his call in the middle of a contest.

"In the second inning (manager Rick) Dempsey took me out of the game and I was wondering why," Pye told The San Bernardino County Sun. "The game was 6-0 and there had been two rain delays, so I thought he was just giving me a rest. "Dempsey said I was going down and I said 'Why? I'm hitting .330.'"

He soon learned he was going up to the majors. Pye picked up one hit in 10 at bats over his seven games that year. When he returned in 1995, he made it to the plate eight times. He didn't get another hit.

His one hit came in that major league debut, a check swing in his first at bat.

Pye moved to the Astros system and AAA Tucson for 1996, then played three games at AAA Norfolk with the Mets in 1997 to end his career.