Originally published Jan. 6, 2019
Dave Huppert's Lehigh Valley IronPigs reached the .500 mark at the end of June 2009, but the manager wasn't impressed, he told The Easton Express-Times.

"I don't even care (about reaching .500)," Huppert told The Express-Times. "That's not what we're here for -- .500 is just a (bleeping) number. But when the end of the year comes and we're in the playoffs, then we've achieved something. We didn't achieve (anything) being .500."

By that point, Huppert had achieved much in his baseball career. He'd spent more than three decades as a player and manager. As a player, he achieved the majors for 17 total games, two for the Orioles in 1983 and 15 for the Brewers in 1985.

His minor league managerial career itself lasted three decades, starting just after his playing career's end and extending through 2016.

Huppert's career began in 1977, signed by the Orioles as an undrafted free agent out of Golden West College.

He started with the Orioles at rookie Bluefield. He saw AA Charlotte in 1978 and stayed there the next two seasons. He made AAA Rochester in 1981 - in time to participate in a historic game.

Playing for the Rochester Red Wings, Huppert caught 31 innings of the record-setting 33-inning game against Pawtucket that April. He came out only after being lifted for a pinch-hitter in the 32nd.

"The worst part of it," Huppert told The Washington Post years later, "the other catcher pulled a rib-cage muscle, so {Manager} Doc Edwards put me in the next afternoon, on Easter Sunday, and I caught nine more innings. Forty innings in less than 24 hours."

Huppert debuted with the Orioles in Baltimore in September 1983. In his two appearances, he didn't make it to the plate.

He returned with the Brewers in 1985 and got into 15 more games. This time, he amassed 21 at bats, but he picked up a single hit.

Huppert started 1986 back in the minors, but then took a job mid-season managing rookie Helena.

Then, in 2005, he returned for a single season back in the majors as third base coach for the Nationals. 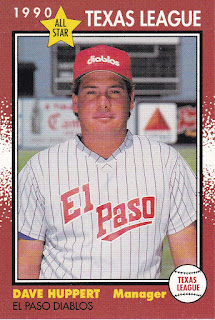