Steve Roeder got enough details right to play five pro seasons, but not above short-season

If The Pittsburgh Press wanted to know about Class A baseball, Steve Roeder was the guy to talk to, he told the paper.

Roeder had been at short-season Welland for two seasons, after two seasons spent in rookie ball.

"The biggest thing that players have to learn here is that baseball is a business," Roeder told The Press. "It's not the game it was in high school or college. There are a lot of details that make a difference here."

Roeder went on to play another season in rookie ball, but he'd never get above Welland. He played those five seasons, but he never got the details right enough to move higher.

Roeder's career began in 1988, taken by the Pirates in the 34th round of the draft out of Penn High in Mishawaka, Ind.

Roeder started with the Pirates in the rookie Gulf Coast League. The pitcher saw six outings and gave up two earned runs in 12.2 innings of work. He returned there for 1989. He got into 12 outings that year, with a 4.02 ERA. 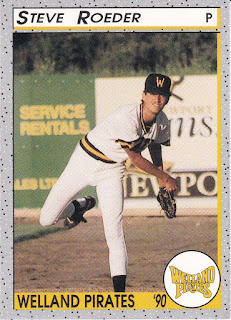