Steve Cooke lived on the edge of the plate; Saw the majors over six seasons

Pirates left-hander Steve Cooke kept the Marlins off balance in this May 1997 win and he did so without overwhelming them with speed, according to The South Florida Sun-Sentinel.

Among those Cooke fooled was Marlin Gary Sheffield, who went 0 for 3, and Sheffield explained to The Sun-Sentinel why.

"He throws a little slow," Sheffield told The Sun-Sentinel. "When you're looking for the slow stuff, he throws his fastball and it looks like it's 90 mph. He lives on the edge of the plate."

Cooke returned to the majors full time that year, after losing a full season two years prior to bursitis in his shoulder. In all, Cooke would see time in six major league seasons and get at least 23 starts in three of those campaigns.

Cooke's career began in 1989, taken by the Pirates in the 35th round of the draft out of the College of Southern Idaho. He was also credited by his full name, Stephen Cooke.

Cooke drew notice in high school in Oregon and then at Southern Idaho. In one game, those watching included Athletics GM Sandy Alderson, according to The Twin Falls Times-News.

"I was pretty nervous," Cooke told The Times-News of Alderson's presence. "But I knew there were going to be scouts there, so I just tried to put it out of my mind. Fortunately, that day I pitched pretty well."

The Athletics didn't get Cooke, but the Pirates did. Cooke first hit the field for the Pirates in 1990 at short-season Welland. He went 2-3 over 11 starts there, with a 2.35 ERA.

Cooke threw a complete game in early September against the Dodgers for his ninth win on the year. He gave up five hits over the first two innings, then just three after that, The Associated Press wrote.

"I like to go nine," Cooke told The AP. "That means I didn't have to throw too many pitches, which means I got ahead in the count and made them hit my pitch."

In spring 1997, Cooke told The AP he felt he was back after his injury.

"I feel like the old Steve Cooke again when on the mound," Cooke told The AP. "My velocity might not be quite what it was before I got hurt, but it's close and all my other pitches seem a little sharper than they did before."

Cooke made the team that spring and he returned to form. He saw 32 starts and went 9-15, with a 4.30 ERA. Cooke moved to the Reds for 1998 and got into a single game, an April 2 start. He went six innings and gave up one earned run. Tendinitis then sidelined him and he did not return. 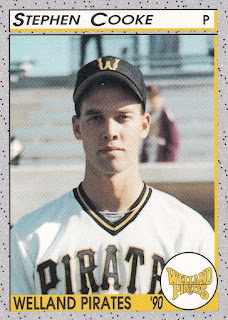