Marcus Hanel missed the bigs in 11 seasons; Been there in two decades since as bullpen catcher

Marcus Hanel helped his Mudcats tie the game this night in August 1997 by hitting a key double, according to The Wilson Daily Times.

The Carolina catcher later explained to The Daily Times how he did it.

"I knew the pitcher was behind me (in the count), and I had an opportunity to move (teammate) Charles (Peterson) over," Hanel told The Times. "Because they were trying to pitch me inside, I was able to be aggressive at the plate, and try to drive him in."

Hanel had watched and worked with pitchers as a catcher over nine seasons. He went on to play in two more campaigns. He made AAA over three of his seasons as as a player, but he never made the majors.

Hanel has, however, gone on to continue catching - and make the majors. He has now served as Brewers bullpen catcher for over two decades.

Hanel's career in baseball began in 1989, taken by the Pirates in the 18th round of the draft out of Horlick High in Racine, Wisc.

Hanel started with the Pirates in the rookie Gulf Coast League. He moved to short-season Welland for 1990. He hit .153 over 40 games there.

Hanel soon found himself back home in Wisconsin, as the bullpen catcher with the Brewers, a job he continues in in 2020.

In 2015, Hanel, nicknamed Koos, happened to catch something else, Kris Bryant's first home run ball as it landed in the Brewers' bullpen.

Hanel spoke to The Milwaukee Journal-Sentinel in 2013 about his warmup role catching Brewers pitchers.

"The one thing is I get to have a uniform. I get to feel like I'm a part of it, to physically be a part of it," Hanel told The Journal-Sentinel. "I don't have to sit around, I get to be hands-on, and that's something that I love." 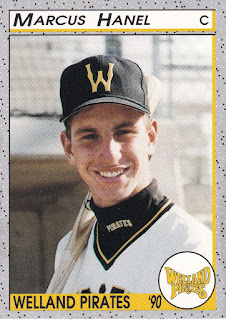