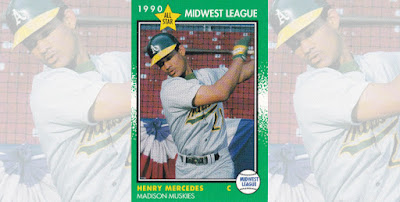 Originally published March 21, 2015
Henry Mercedes signed with the Athletics as a catcher out of his native Dominican Republic. He immediately ran into difficulties, according to The Associated Press.

"I wanted to return to my country," Mercedes told The AP in July 1996. "I think there are a lot of players that went through the same situation."

Mercedes eventually got over those language issues. He also went on to a long career as a pro. That career included time in five major league seasons.

Mercedes was originally signed by the Athletics in 1987. He first hit the field in the United States in 1988, playing in the rookie Arizona League. He made single-A Madison and Modesto in 1989.

He debuted in Oakland in April 1992. He got into nine games for Oakland, picking up four hits in five at bats. He closed out the season with a run-scoring triple that gave his team a lead.

He rounded out his major league career with four games with the Royals in 1996 and 23 with the Rangers in 1997.

Mercedes went on to play in three more minor league seasons. He then spent time in Mexico. He's last credited as playing in the Dominican Winter League in 2006. 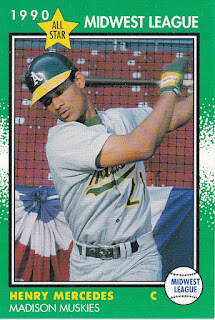