Originally published Jan. 17, 2019
One of Chris George's 1992 baseball cards talked up his potential in the major leagues.

He'd seen two outings with the Brewers in Milwaukee the previous year and he looked to return in 1992.

"Tough and competitive, Chris just might be a solid addition to the Brewers bullpen in 1992,' the card read.

By the time that card came out, though, George's major league career was over. He played that year at AAA and returned for one more after that, but those two appearances in 1991 proved the extent of his big league career.

George's career began in 1988, taken by the Brewers in the seventh round of the draft out of Kent State University.

George started with the Brewers at single-A Beloit. He went 7-4 over 22 outings, four starts. He saved six games.

In May, he spoke to The El Paso Times about difficulties he'd had with periods of rapid heartbeats. He tried not to worry about it.

"I go day to day," George told The Times. "I live for today and worry about tomorrow later. If there's something wrong, I'll treat it with medication. I'm not going to worry about it because it's out of my control."

George played 1991 back at Denver. The reliever went a 16-game stretch where he gave up a single earned run. That September, he got his call up to Milwaukee.

He played both his major league games in October. He debuted Oct. 1 as a starter. He went five innings and gave up two earned runs. He then pitched an inning of relief Oct. 5 to round out his big league career.

George returned to Denver for 1992. He got into 12 games and started eight. He missed all of 1993, then returned for 1994 at AAA and AA to close out his playing career. 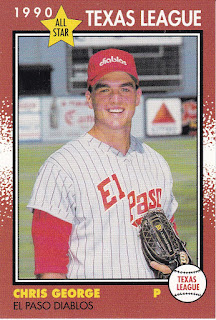