"I moved my fastball in and out, and my sinker was good," Robertson told Tribune after the 6-1 victory. "The key was I was keeping it down. I got a lot of first-pitch outs, and that really helped."

Robertson had seen time in two previous major league seasons, though not as a starter. He went on to pitch in a total of six. In two of them, he started 31 and 26 games each.

Robertson's career began in 1990, taken by the Pirates in the ninth round of the draft out of Texas AandM.

Then, in April 1993, he made Pittsburgh. Robertson saw nine games, giving up six earned in nine innings of work.

A few days before his major league debut, Robertson explained to The Buffalo News about his delivery, a hitch meant he had to pitch slower. Too rapid and he'd lose some control.

Later that month, ahead of Robertson's major league debut, Pirates manager Jim Leyland talked up Robertson to The Pittsburgh Post-Gazette.

"He's got a chance to develop into a good pitcher," Leyland told The Post-Gazette. "That's why we held onto him. We wanted to give him a chance to face some better hitters. We think he has a future."

His future, though, was largely elsewhere. He saw eight outings with the Pirates in 1994. He then moved to the Twins for 1995.

He played two more seasons, 1999 in affiliated ball and 2000 in independent ball to end his career. 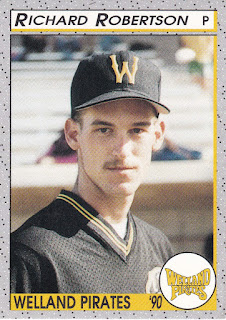