The Greenville University baseball team entered the 2020 season with its share of experienced seniors and head coach Lynn Carlson expressed optimism, according to Greenville's Papyrus.

"With all of those guys, their characters are the same and it is unselfish," Carlson told The Papyrus. "They would do anything for their teammates and us coaches."

Carlson spoke with more than two decades of experience working with seniors and underclassmen at Greenville. He started there as head coach in 1997.

Before he was a coach, he was a player himself and he played in the pros. Carlson's pro career lasted two seasons and topped out at high-A.

Carlson's pro career began in 1990, taken by the Pirates in the 16th round of the draft out of Greenville College (now Greenville University) in Illinois.

Carlson started with the Pirates at short-season Welland. The pitcher went 4-1, with a 4.02 ERA over 16 outings, eight starts.

He moved to single-A Augusta and high-A Salem for 1991. He also saw five starts with the Padres at single-A Charleston. Between the three clubs, Carlson went 7-6, with a 3.10 ERA in his final season as a pro.

Carlson then went back to school at Greenville and graduated from there in 1993. He later got a master's degree from the University of Kentucky.

In 2011, he previewed the season, but also noted the students at the Free Methodist-affiliated school played for more.

"Our success will not just be measured in games," Carlson said in a story published to the school's site. "We are striving to honor Christ in everything we do and to be good teammates. That is how we will truly win." 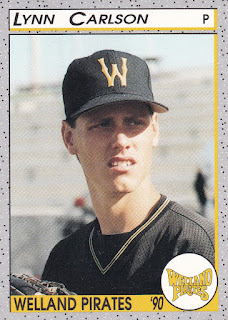