Janeiro Feliz purchased coffee that morning in April 2000 at a Sleepy Hollow, NY, deli and paced around inside the store, the store's manager recounted to The New York Times later.

''Then he walked out, put his cup down on the phone booth outside and walked into the bakery,'' the manager told The Times. ''I heard two shots and then screams from the kids and mothers.''

Feliz, then 30 and years removed from time spent playing in the Pirates organization, gunned down two people at that bakery that day, one inside and one outside. He also critically wounded a third, according to accounts from the time.

He did so, according to the accounts, obsessed with a former girlfriend. One of the men had been seeing the woman and both he and the woman had orders of protection against Feliz.

Feliz' ex-girlfriend wasn't at the bakery that day and was not harmed. Feliz, however, fled and eventually made his way toward his ex-girlfriend's residence, where police pinned him down in an alley and he shot and killed himself, according to the accounts.

Feliz' baseball career lasted four seasons, from 1988 to 1990 with the Pirates organization and a season spent in 1995 at independent Yonkers, near what became his home outside New York City and near Sleepy Hollow.

Feliz signed with with the Pirates out of his native Dominican Republic. He played two seasons in the rookie Gulf Coast League, then 48 games at short-season Welland in 1990. He never hit higher than .202. His first name was misspelled on his Welland card as Janiero Feliz.

Feliz continued with local baseball. He played on a local team called the Tarrytown Pirates. He also coached youth baseball.

After the shootings, a 15-year-old boy spoke to The New York Post and recalled Feliz as his coach the previous summer.

"He was a good coach, but when you got him mad, he had a temper," the teen told The Post. "If you didn't do a good job, he would make you run around the track."

The two people Feliz killed were identified as Manuel Smith, who had been dating Feliz' ex-girlfriend and was killed by Feliz inside the bakery, and Angel Segarra, whom Feliz chased down outside and killed, The Journal News from White Plains wrote. The injured man who survived was Augostin Pizarro, who was shot while struggling with Feliz. 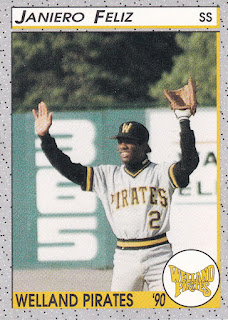