Young minor leaguer Luis Campusano credited his father with helping him learn the game and reach the pros, according to The Allentown Morning Call in 2019.

"My dad was always a big influence on me, in life and in baseball," the younger Campusano told The Morning Call. "From 2 years old, it started with a tennis ball and a mini bat. My mom and dad would toss me balls in the back yard, all day, every say. Since then I really wanted to do this and be like my dad."

Luis Campusano first made the pros in 2017 and continued into 2019 at high-A. His father debuted in the pros in 1989 and went on to play in five seasons. Genaro Campusano never made it out of high-A.

Genaro Campusano started his career with the Pirates that year in 1989, signed as a free agent out of his native Dominican Republic.

The team that signed him, the Pirates, was his favorite team growing up, according to his Welland card back.

Genaro Campusano started with the Pirates in the rookie Gulf Coast League. He hit .245 over 30  games. He then moved to short-season Welland for 1990. He hit .212 there over 45 games.

He returned with the Pirates at high-A Salem in 1992. He saw 20 games and picked up just four hits in 54 at bats. He signed with the Rangers for 1993 and played in 29 games at single-A Charleston to end his career. 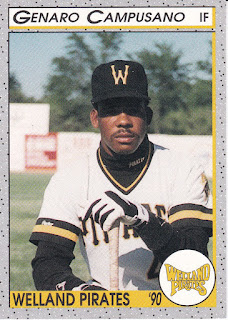