Originally published July 25, 2013
It took Tim Moore a little while, but he finally decided to sign.

The high schooler from California wanted to go pro, finally signing late that August in 1989, The Los Angeles Times wrote.

"I just didn't feel I was ready for college," Moore told The Times. "I kind of wanted to give this a shot."

Moore hit the field for the Cubs the next summer, at rookie Huntington. He eventually hit the field in three professional seasons, never making it above single-A.

Moore's career began that year in 1989, taken by the Cubs in the 12th round of the draft, out of La Habra High School in Whittier, Ca.

At La Habra, Moore played football and basketball, along with baseball, according to The Times. He hit .530 and passed on USC and UC Irvine. In one March 1989 game, Moore went 3 for 4, with three stolen bases.

With the Cubs, Moore started in 1990 at rookie Huntington. To team officials, for his ProCards card back, Moore spoke of his hopes.

"My goal is to play as much as possible as long as possible," Moore is quoted as saying on his card back. "I'd like to make it to the big leagues or be a success at whatever I do."

With Huntington, Moore hit .281 in 54 games. He also got four games at high-A Winston-Salem. He hit a three-run home run in a late-July game at Huntington, one of two he hit on the year.

Moore played 1991 between single-A Peoria and short-season Geneva, hitting just .194 between them. He then returned to Peoria for 1992, hitting .242, ending his career. 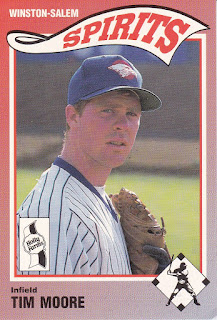