Stanton Cameron hit home runs throughout the minors, never got chance to hit one in bigs

Originally published May 4, 2018
In the midst of his second big home run season, Stanton Cameron told The Baltimore Sun the power display was nothing new.

"Since I was young and in high school, I've always been able to hit home runs," Cameron told The Sun in August 1993. "I don't try to hit home runs. I guess you can call it God-given."

Cameron spent that season at AA, his first at that level. He ended the season with 21 home runs, after hitting 29 the year before at high-A Frederick.

Cameron went on to play in 13 pro seasons and hit 128 pro home runs. He never got the chance to hit a home run in the majors.

Cameron's career began in 1987, taken by the Mets in the 24th round of the draft out of Palo High School in Tennessee.

Cameron first saw AAA in 1994 with the Pirates at Buffalo. He hit .173 in 38 games there. He played the rest of the season at AA Carolina.

He started at Buffalo that year 0 for 15, before his manager took him aside. Cameron then broke the slump with a home run, according to The Buffalo News.

"I told him to relax," manager Doc Edwards told The News. "I told him, 'You were sent here to play, and I'm going to put you in right field every day. The only time I'm going to take you out is if I think you need a day off because you're tired.' "

Cameron saw 47 games in 1995 across three organizations and two levels. He played 199 largely in independent ball and 1997 at unaffiliated High Desert.

He then returned for two final seasons in 2002 and 2003 in independent ball to close out his career.

Cameron was later interviewed in 2018 on Fox Sports Knoxville about his long career. 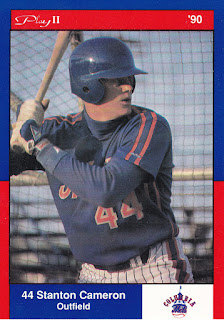