Southeastern Louisiana hurler Shannon Jones had a big game for his squad in 1988, according to the school's record book.

The starter Jones went out against Louisiana State University and struck out 18 batters to tie a school record that had stood since 1961, the record book reads.

Jones went on from Southeastern Louisiana to play in the pros. His pro career lasted four seasons. He made AA, but didn't make it higher.

Jones' pro career began in 1989, taken by the Cubs in the 33rd round of the previous year's draft out  of Southeastern Louisiana.

At Southeastern Louisiana, Jones went 7-3 and struck out a total of 98 batters that season in 1988, good for seventh all-time at the school.

Jones started with the Cubs at short-season Geneva. He went 6-2, with a 1.53 ERA. He also threw two complete games and one shutout, along with striking out 113 in 94 innings.

Jones returned to Winston-Salem for 1991, but also saw four outings at AA Charlotte. He gave up seven earned in 9.2 innings at Charlotte for a 1-1 record.

Jones went 8-6 in 1991 at Winston-Salem, with a 3.16 ERA. He picked up a win in a June game as he pitched into the seventh and another win in an eight-inning effort in July.

Jones returned for three more outings in 1992 at independent Salt Lake City to end his career. 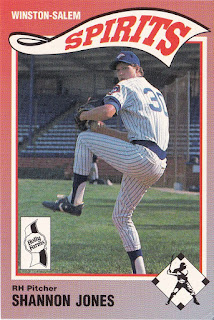