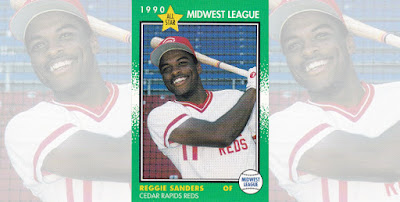 Originally published June 23, 2010
Reggie Sanders only had nine major league games under his belt in spring 1992, but he was already confident.

Sanders went on to back up most of what he said, going on to become an All Star and play in 17 major league seasons for eight clubs.

Sanders began his career taken in the seventh round of the 1987 draft by the Reds. He started at short-season Billings, then single-A Greensboro and Cedar Rapids in 1989 and 1990.

At Greensboro, Sanders hit .289 with nine home runs. He also played a role in an early season brawl with Greensboro. An opposing player slid hard into second, resulting in Sanders pushing back. The benches cleared, five were ejected, including Sanders, according to a wire account.

He also made the South Atlantic League All Star team as a late replacement, taking the game's MVP. With Cedar Rapids, Sanders hit .285 with 17 home runs, earning league MVP honors.

For 1991, Sanders earned a promotion to AA Chattanooga, then the jump directly to Cincinnati in August. He was even thought of as a replacement for Eric Davis in center field. Davis was soon traded.

Sander's rookie year in 1992 proved a successful one. He hit .270 with 12 home runs, coming in fourth in Rookie of the Year voting.

By 1994, Sanders was beginning his third full season in the majors. He also got into another brawl, one he was heavily criticized for. In the eighth inning, down by two, a young Pedro Martinez threw one inside, too far, hitting Sanders in the elbow. Sanders charged the mound.

What he was criticized for was the young Pedro was working on a perfect game. He couldn't have hit Sanders intentionally.

"There I am, no way am I trying to hit him," Martinez told reporters afterward. "I guess he took it the wrong way. I was surprised he charged out. Surprised, but not afraid."

Sanders played with the Reds through 1998, earning All-Star honors in 1995. He finished out his career with a succession of teams, including the Diamondbacks in 2001, helping his club win the World Series. He returned to the World Series again in 2002, with the Giants, and in 2004, with the Cardinals.

But his final years were marred by injuries. In 2007, a torn hamstring limited his playing time to just 24 games. By January 2008, he was contemplating retirement. He had played his last game.

"I feel like I still want to play," Sanders told ESPN.com, "but this is about making the right decision for me and my family. That's where the holdup is." 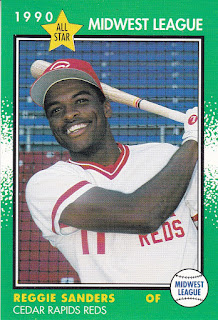