Paul Blair liked to knock in runs; His father had long ML career, he made AAA, not bigs

Paul Blair missed the suicide squeeze in this April 1989 game, so he did one better, according to The Shreveport Times: He got the run in on a single.

"I know I had to get the RBI one way or another," Blair told The Times. "I like knocking in runs. You have to be competitive if you see an RBI out there."

Blair knew he needed to be competitive through his five previous seasons a pro. He also know as he'd watched his father play and coach the game his entire life. His father, also Paul Blair, played in 17 major league seasons, 13 of them with Baltimore.

The younger Paul Blair followed the father into the pros, but he couldn't follow him to the majors. He played in eight total seasons. He made AAA, but not the bigs.

Blair's career began in 1984, signed by the Giants out of Pierce College in Los Angeles. Blair's formal name is Paul Blair III.

Blair also got a brief looks at AA Shreveport and single-A Fresno in 1986. He then played 1987 at Fresno and then 1988 at single-A San Jose.

In June 1989, he spoke to The Los Angeles Times about struggling at Shreveport. A series of errors meant he lost his starting spot.

"I'm not really worried about it, I'm just going to sit back, do the work and wait for the opportunity," Blair told The Times. "Right now, all I can do is wait."

Blair moved up to Phoenix that year. He knocked in runs there on a single and a double in a July game. 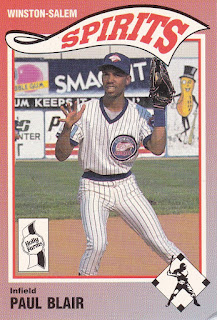