Matt Newsom served as a minor league GM and in racing; Also donned a chicken suit

Winston-Salem Spirit assistant general manager Matt Newsom tried to explain some of the economics of minor league baseball to The Washington Post in July 1989.

Basically, teams need to continually work to get more people out to games, he told The Post.

"The frustrating thing about the finances here is that it costs us the same to turn on the lights and open the park whether one person comes or a thousand people come," Newsom told The Post then. "If we're not selling out every game, there's always room for improvement."

Newsom spoke to The Post as he worked for the Carolina League mainstay his first full year out of college.

With Winston-Salem, one of his roles included being the Holly Farms Chicken, at least for one day. Newsom recently found this project and reached out. When the topic of Lickety Split's inclusion in the Winston-Salem set came up, Newsom revealed that he was, in fact, the person in the suit.

Newsom grew up in Mississippi and graduated from Davidson College in North Carolina in 1988. He then joined Winston-Salem. He stayed with Winston-Salem through 1991, Newsom wrote.

He then went to work in hockey, for the American Hockey League's New Haven Knighthawks and Hamilton Canucks. Hamilton named him vice president of operations in 1992.

By 2001, Newsom was ready to move on to racing as he joined the staff of Lowe's Motor Speedway as director of consumer services and logistics, according to Motorsport.com.

"Matt's management background in minor-league sports has prepared him extremely well for his new position here at the speedway," Doug Stafford, executive vice president of Lowe's Motor Speedway, said, according to Motorsport.com. "The very nature of a minor-league franchise forces management to emphasize customer services and streamline logistics, points that are also extremely important in hosting a major motorsports event." 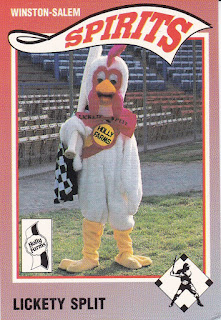