Originally published June 28, 2018
Kevin Carroll signed on with the Cortland Crush for 2017 as an assistant coach and the team was glad to have him, according to their Facebook post.

"We are very fortunate to have a coach with Kevin's baseball background on our staff," team manager Bill McConnell said in the post. "Proven as a player and as a Coach, Kevin is one of the best baseball men that I've had the opportunity to work with. Our players will learn a tremendous amount from him."

Carroll brought with him experience in five professional seasons as a player. He then had a long stint as an assistant coach in high school. As a player, he never made it past AA.

Carroll's career began in 1989, signed by the Mets as a free agent out of Siena College in New York State. He previously attended Onondaga Community College and LaFayette High School near Syracuse.

Carroll graduated from LaFayette in 1985 and he later made the school's Hall of Fame. He then moved on to Onondaga, where he hit a two-run home run in an April 1987 game. He moved to Siena for 1988 and 1989.

He started with the Mets in the rookie Gulf Coast League. The catcher hit .209 over 37 games. He then played 1990 between single-A Columbia and high-A St. Lucie. He saw another 37 games and hit just .133. Carroll returned to St. Lucie for 1991 and saw 35 games. He scored in a June game.

Carroll then went into coaching. He served as assistant head coach Fabius High School near Syracuse from 2000 to 2016. He then coached at Cortland in 2017. 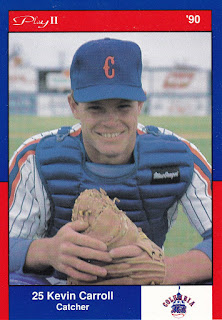