Julio Strauss' services were won in Venezuela by the Cubs; He made AAA, but not the bigs

Julio Strauss readied to start his career in 1989, it was just a matter of with whom as two teams appeared to have had him signed, according to Sports Illustrated.

The Cubs signed him directly, through their scout. But the Expos also seemed to have him signed, through his Venezuelan team, Sports Illustrated wrote.

Strauss' fate was expected to be determined by the commissioner's office, which apparently sided with the Cubs.

Strauss went on to play five seasons with the Cubs. He made AAA Iowa, but despite early success, Strauss never made Chicago.

Strauss' career began that year in 1989 as a native of Aragua, Venezuela. He previously played in his home country's winter league. He recorded eight wins in 1988-1989 to lead the league.

He started with the Cubs at high-A Winston Salem and he started strong. By July, The Winston-Salem Chronicle called him "one of the premier relief pitchers in the Carolina League" as he'd  already amassed 15 saves. He also made the league all-star team.

Earlier that season, Strauss pitched in both ends of a double-header. He picked up the win in the first game and save in the second. Overall, he went 5-7, with a 2.95 ERA and 17 saves.

He played 1990 between Winston-Salem and AA Charlotte. He picked up 13 saves that year, with a 2.86 overall ERA.

He then played 1991 largely at Charlotte, but he also got six outings at AAA Iowa. He gave up a hit to a rehabbing Bo Jackson with Charlotte that August.

Strauss then 1993 between AA Orlando and high-A Daytona to end his Cubs career. He is credited as returning briefly in 1995 for independent Minnesota, his last recorded time as a pro. 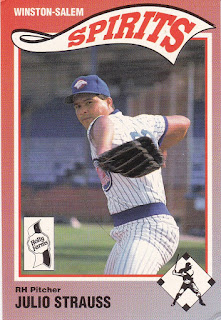