Julian Vasquez put up good numbers at high-A in 1991; Made AAA, but not the bigs

Vasquez gave up just two runs over 56 relief appearances and there was a possibility he might jump to AAA for 1992, The Times wrote.

Vasquez posted that ERA at St. Lucie in his fifth season as a pro. Despite seeing AAA in 1993, he never made the majors and the main part of his career ended after that AAA campaign.

Vasquez' career began in 1987, signed by the Mets out of his native Dominican Republic.

Vasquez started with the Mets at rookie Kingsport. He went 2-3, with a 3.29 ERA over 25 relief outings.

He then moved to AA Binghamton and AAA Tidewater for 1992. He continued his success in 24 outings at Binghamton, where he posted a 1.35 ERA and saved 17. He also saw 20 outings at Tidewater and his ERA there ballooned to 5.56.

In June, the Mets talked to The Times about their approach to Vasquez.

"For his sake, and for the sake of the organization, we're not going to rush him ... We want, in our mind, to feel he's equipped to experience success once he does come to the major leagues," Mets assistant vice president of baseball operations Gerry Hunsicker told The Times.

But Vasquez' career soon ended. The Mets sent him to the Angels at season's end to complete an earlier trade. He then was placed on the 60-day emergency disabled list to start the season. He never saw playing time in the minors again.

Vasquez is credited with playing in one more season, but not until 2001 and for independent Somerset. He went 4-1 over 30 outings, with a 3.33 ERA to end his career. 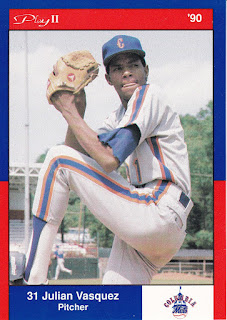