John Jensen was excited to turn pro out of college; Played seven pro seasons, made AAA

The Cubs selected John Jensen in the 1988 draft and he quickly signed, according to his hometown Galveston Daily News.

Immediately after signing, Jensen made his way to the Cubs' spring training facility Mesa, The Daily News wrote.

"John is excited to be there," his father Paul Jensen told The Daily News then. "We all are."

John Jensen played that first year with the Cubs at single-A Charleston. He went on to play professionally over seven seasons. He made AAA with Iowa, but he never made the majors.

Jensen's career began that year in 1988, taken by the Cubs in the 30th round of the draft out of the University of Texas.

He then played 1989 between single-A Peoria and Winston-Salem. He hit .234 between them with another six home runs.

He returned to Orlando for 10 games in 1994 and also played in Mexico for Puebla. That season marked his last as a pro. 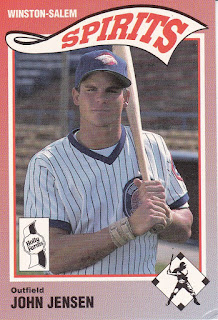