John Gardner played seven seasons, then became a firefighter; Made AAA, not bigs

The Indiana State product then soon started a new career in the town where he went to college. He went into firefighting, according to The Terre Haute Tribune-Star.

“I guess my biggest reason would be to bring to the table what I can do to help out in the public,” Gardner told The Tribune-Star in 2008 of why he became a firefighter, "my physical ability and my educational background."

Gardner's professional baseball career topped out in a season spent at AAA Iowa. His firefighting career had lasted 13 years by 2008 and he spoke to The Tribune-Star on the occasion of his promotion to public information officer.

Gardner's baseball career began in 1987, taken by the Cubs in the 26th round of the draft out of Indiana State.

Gardner started with the Cubs at rookie Wytheville. He went 3-1 over 12 outings, eight starts, with a 3.42 ERA.

Gardner then returned to Charleston and saw high-A Winston-Salem briefly in 1989, then Winston-Salem full-time in 1990. He went 5-4 used mostly as a reliever in 1990, with a 3.53 ERA. He also recorded five saves.

Gardner finished out his career in 1993 between AA Orlando with the Cubs and AA Birmingham with the White Sox.

Gardner then soon returned to Terre Haute and, by 1995, started his career as a firefighter. In 2010, he served as a pitching coach for the summer collegiate league Terre Haute Rex baseball team.

In 2012, Gardner's son, Cody Gardner, was playing for his father's old school Indiana State. Cody Gardner counted his father as his top influence in an interview that year with The Tribune-Star.

"Ever since I could walk, I've always listened to my dad … with his baseball knowledge and him teaching me the fundamentals," Cody Gardner told The Tribune-Star. "Pretty much everything I've learned [about baseball] has gone through him. I always go to him with questions. He was my coach through Little League until I was in high school. But he still helps me every day." 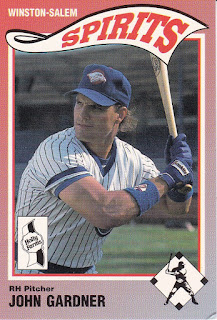