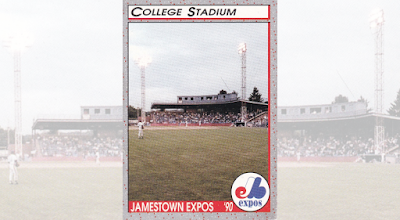 The stadium in Jamestown, NY, once known as College Stadium has been a stalwart of baseball in the western New York city.

It has since been named for another baseball stalwart of Jamestown, Russell E. Diethrick, Jr.

Along the way, the stadium hosted professional baseball almost continuously from the time of its completion to 2014. (The Greatest 21 Days visited for the second-to-last pro game there in 2014).

The stadium, also previously known as Municipal Stadium, has since become home to a summer collegiate team and continues to be home to local college and high school ball.

The stadium was originally opened in 1941 and started out as home of the Jamestown Falcons, a part of the Pennsylvania-Ontario-New York League, the forerunner of the NY-Penn League.

In the first game played there, May 6, 1941, Jamestown lost to Batavia 6-2, according to The Chautauqua County Star News.

The park then changed to College Stadium in 1964 to reference the newly built Jamestown Community College built next door.

The park then received the Diethrick name in 1997 to honor Diethrick. Diethrick had long been involved in baseball in the city, from youth to the pros.

Diethrick, who was inducted into the local Chautauqua Sports Hall of Fame in 1982, served as the longtime recreation director in the city. Part of his duties involved supervising about 20 youth baseball leagues, according to the hall.

He also served as assistant GM for the Jamestown Falcons/Expos in the 1970s. He also worked on the National Babe Ruth Advisory Board and won a spot in their Hall of Fame in 1997. 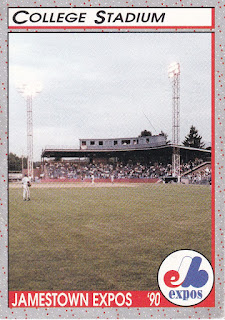