Brook Fordyce's confidence turned in one year, then made the bigs over a decade 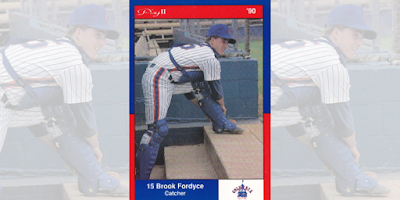 Originally published June 30, 2018
Starting his eighth professional season in 1996, Brook Fordyce saw the majors only in the previous year. Even then, he only saw four games.

So, after signing with the Reds, Fordyce set out on another season at AAA and had a career-year.

"I knew then that I could do it," Fordyce told The South Florida Sun Sentinel. "My confidence turned in one year. I knew that I was ready to play."

Fordyce then took that confidence on to a string of eight-straight major league seasons where he saw at least 40 games played. He got into more than 90 games in four of those campaigns.

He played in three of those seasons after he almost died when an artery burst near his stomach.

Fordyce's career began in 1989, taken by the Mets in the third round of the draft out of St. Bernard's High School in Connecticut.

Fordyce started with the Mets at rookie Kingsport. He made single-A Columbia in 1990, then AA Binghamton in 1992.

The catcher hit AAA Norfolk for 1993, but didn't see Queens until 1995. He debuted that April and got into four games.

By early June 1999, Fordyce had found his groove as his batting average hit .337. But he also struggled behind the plate with base stealers, The Chicago Tribune wrote.

"Hitting comes and goes," Fordyce told The Tribune, "but catching and throwing should be there all year-round. I know I need to work on it."

Then, in January 2002, Fordyce woke up at home and the artery burst. He passed out in the bathroom. He lost five pints of blood and nearly died, according to The Baltimore Sun. He recovered quick enough to make spring training.

"The doctors are confident that it was a freak thing and that it has healed," Fordyce told The Sun afterward. "Going out on the field and doing what I have to do has eased my mind."

He has since moved on to baseball instruction and coaching. In 2017, he was named head coach at Keiser University in Fort Lauderdale. 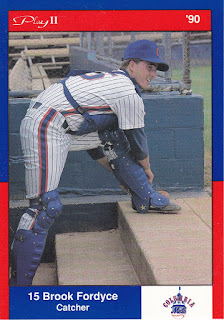