Billy White moved up to AA, then stayed there over five seasons; Made AAA, but not the bigs

Billy White hit well at high-A Winston-Salem by 1990. He picked up the game-winning hit in a contest that month and he had bigger plans ahead, he told The Newport News Daily Press.

"I hope to be in (Double-A) Charlotte next season, that's the next step," White told The Daily Press. "It's in my hands, but then again it's out of my hands."

White did make AA Charlotte the next year. But he then stayed at AA for much of the next five seasons, including the final two seasons in the Rockies system. He did make AAA in 1996, but he never made the majors.

White's career began in 1989, taken by the Cubs in the third round of the draft out of the University of Kentucky.

White split 1993 between AA Orlando and high-A Daytona with the Cubs. He then moved to the Rockies system and AA New Haven for 1994.

In September 1994, White spoke to The Hartford Courant about his year there.

"It was like a breath of fresh air," White told The Courant. "It's not just the fans, though they're great. It's the team. I've had good times in baseball, but the guys on this team are closer than any other I've been on."

White then started his post-playing career as a minor league coach. He served as hitting coach at single-A Asheville from 1997 to 1999. He then managed a season at short-season Portland in 2000, then returned to hitting coach duties. He's last recorded as serving as a hitting coach in 2005 at high-A Sarasota.

In 2000, as he managed Portland for the Rockies, White spoke to The Denver Post and offered high praise for two prospects on his team, Garrett Atkins and Brad Hawpe. He spoke of both in comparison to Todd Helton.

"Since Helton, these two guys are as good as we have," White told The Post then. "I think Brad might even be a little better at hitting left-handed pitching than Todd was when he arrived. Atkins hits with a lot of power and he uses the whole field. He's a mental hitter." 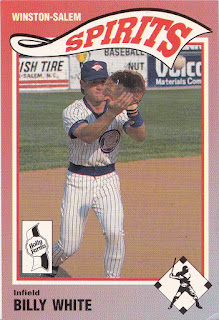