Alberto Diaz made a perfect sacrifice in 1991; Played five seasons, never made AA

Alberto Diaz tried to set the table, but his teammates in this May 1991 game couldn't bring the runners home, according to The Palm Beach Post.

In the bottom of the eighth, high-A St. Lucie picked up a single and benefited from an error to put two on. Diaz came up and perfectly sacrificed them over, The Post wrote. A fly ball and perfect throw to the plate, however, ended the threat.

Diaz played that year at St. Lucie in his fourth season as a pro. His career would end there soon afterward. He never made AA.

Diaz' career began in 1987, signed by the Mets out of Colegio Santa Elena in his native Santo Domingo, D.R. Diaz was also credited as Al Diaz.

Diaz returned to Kingsport for 1989. In 68 games there, he hit his first two professional home runs and ended with an average of .278. He also stole 31 bases. 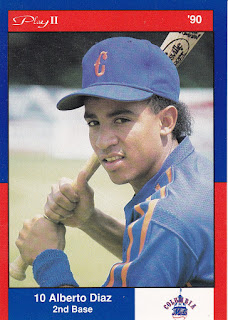