Vince Herring tried his hand at the knuckleball; He never made it above AA

Originally published Feb. 7, 2013
It was the latest obituary for the knuckleball, a pitch mastered by older pitchers. In 1991, there were only two major leaguers throwing the pitch, older pitchers Tom Candiotti and Charlie Hough, The San Francisco Chronicle wrote. 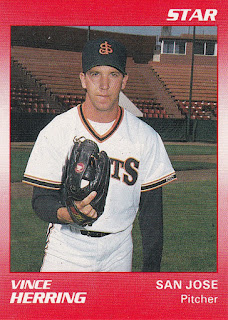