Originally published Dec. 14, 2013
Troy Ricker picked up two hits in this August 1989 game for single-A West Palm Beach and both of them were big hits.

Both of the hits were home runs, one of them a three-run shot, Ricker helping lead West Palm Beach to an 11-1 win, according to The South Florida Sun-Sentinel.

Ricker was in his fifth season as a pro that year, four of those in the Expos system. He went on to play in a total of nine seasons, but made it above high-A just once, a nine-game stint at AAA in his final season. He never made the majors.

Ricker's professional career began in 1985, signing with independent Utica of the New York-Penn League out of his native California.

At Utica, the outfielder Ricker got into 34 games, hitting .127 with 9 RBI. But he also played well enough to catch the eye of the Expos, signing with Montreal for 1986.

Ricker played his first season with the Expos at short-season Jamestown, returning there for 1987. He hit .193 his first year there and .258 his second.

He moved to single-A Rockford for 1988, hitting .240, then single-A West Palm Beach for 1989, hitting just .177. At Rockford, Rickert hit 16 home runs, a career high. He hit one of them in a July game. At West Palm Beach, Ricker's home run total returned to seven.

For 1990, Ricker seemingly tried to find a new path up the Expos chain, after another stint at Rockford. He returned to Jamestown, as a pitcher. He got into 17 games, one start, with a 4.11 ERA.

It was back to the outfield and West Palm Beach for 1991. It was his final year in the Expos system.

Ricker played two more seasons, 1992 with the Twins at high-A Visalia and then 36 games in 1993 with the Rockies. Nine of those 1993 games came at AAA Colorado Springs, his only time above high-A. It was his final year as a pro. 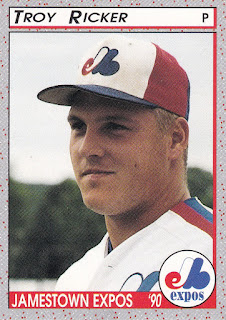