Originally published April 30, 2018
Tito Navarro failed to get a hit in his first 11 major league at bats in 1993. Then, put into the 10th inning of a September game against the playoff-chasing Braves, Navarro knocked a single that proved the game-winner, according to The Associated Press.

"That first hit was slow in coming, but I guess it came at a good time," Navarro told The AP afterward. "Maybe the Giants will buy me a steak dinner."

Navarro's first major league hit came when it mattered. His last did, too, because that hit proved to be his only one in the bigs. Navarro battled back from shoulder injury to make the Mets that year. He played in 12 games, got that one hit, and didn't make it back again.

Navarro's career began in 1987, signed by the Mets as an amateur free agent out of his native Puerto Rico.

As the Mets closed in on 100 losses in a forgettable season that year, though, Navarro found no shame in playing for them, he told The New York Times.

"No," he told The Times. "That's the big show. Not too many can play in that league, not from Puerto Rico."

Navarro finished out the season. He returned for one more season in the minors, but another injury, a leg injury, helped end his career. 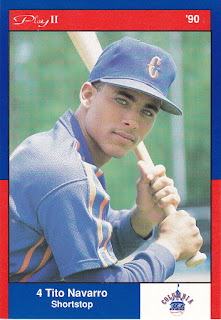