Tim Howard made it to AAA, then he went to Taiwan; He never made the bigs

Originally published June 17, 2018
When Tim Howard returned stateside from two seasons in Taiwan, he expressed excitement to The Yuma Sun.

Howard had just signed on with the Yuma Bullfrogs of the independent Western League.

"It's been a long time since I've had any of my family or friends see me play," Howard told The Sun. "The first couple of games, I might have 200-300 fans from Brawley come to Yuma. I think they're itching to see me play."

Howard's family and friends had had plenty of opportunities to see Howard over the previous decade plus, but not as close. Regardless of that, they never had the opportunity to see Howard in the majors.

Howard's long career began in 1988, taken by the Mets in the fifth round of the draft out of Imperial Valley College in California.

Howard started with the Mets at rookie Kingsport. He hit .280 in 68 games. He then moved to short-season Pittsfield and single-A Columbia for 1989. He hit .281 between them. 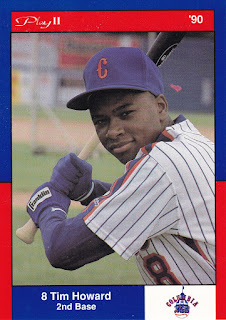