Originally published May 15, 2016
Scott Wilson went from coach to trainer to coach again, according to The Los Angeles Times.

After serving as a junior varsity baseball coach in Orange County, Ca., Wilson joined the Giants as a minor league trainer. He spent four seasons there before returning to the high school ranks in October 1992 as coach at Villa Park High School in California, The Times wrote.

In between, Wilson served as an All-Star trainer twice.

Wilson's professional career started out of Chapman College, where he graduated in 1986 with a degree in sports medicine, according to his Best card.

At Chapman, Wilson also handled medical responsibilities for the school's basketball and tennis teams, his Best card reads. He also served as coach at the Orange County high school.

He joined the Giants as a minor league trainer in 1988. He started at San Jose for 1989 and returned there for 1990. He made the 1989 California League All-Star game as trainer for the Northern Division.

Wilson made his second All-Star team in in 1991 during his third season at San Jose. He returned to the Giants system as a trainer for 1992, then took that high school coaching job, ending his minor league training career. 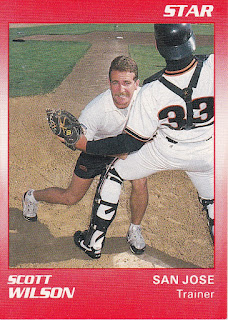